Our first litter was born on August 3, 2010. We had the great honor to borrow and breed Squid’s mother Emenem’s Fly (u. Moel Somolli e. Joe).
Fly is a really nice and social bitch and a very talented sheepdog. Her hip score is A, her eyes were tested clear as a puppy and she has a 2nd prize in IK1. We have met and know several dogs from her litter and we like them a lot. 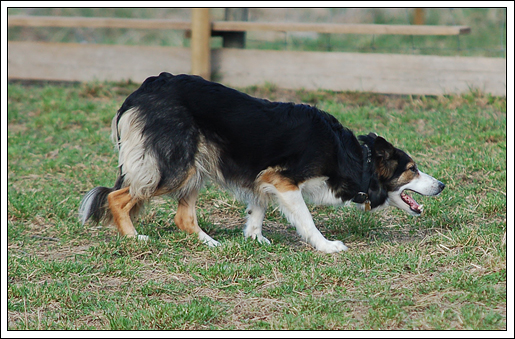 The puppies’ father is Killiebrae Hemp (e. Derek Scrimgeour’s Ben) who lives with Hans-Marius Myhre in Norway.
Hemp has competed with success as a sheepdog at the highest level in Norway. He is cooperative and has a calming effect on sheep. Hemp was 11 years old when we used him and he sired plenty of litters before ours. We really like the dogs from his previous litters, both as sheepdogs and in other sports. Every one of his x-rayed offspring has free hips and seems to be generally very healthy dogs.
Hemp and his Swedish offspring at Vallreg.